Changes in the DECam Community Pipeline (henceforth CP) between DR8 and DR9 of the Legacy Surveys (in particular the switch from dark sky flats to DES star flats) led to residual sky patterns with a sufficiently high amplitude to, e.g., significantly impact DESI target selection. The sky residual patterns exist in all three bands (\(grz\)), with the \(z\hbox{-}\mathrm{band}\) having the worst residuals. So, starting with DR9, we additionally correct DECaLS images to account for the residual sky pattern from the CP. Below, we include some representative \(z\hbox{-}\mathrm{band}\) exposures from DR8 imaging, and from DR9 imaging before and after applying the sky correction described on this page: 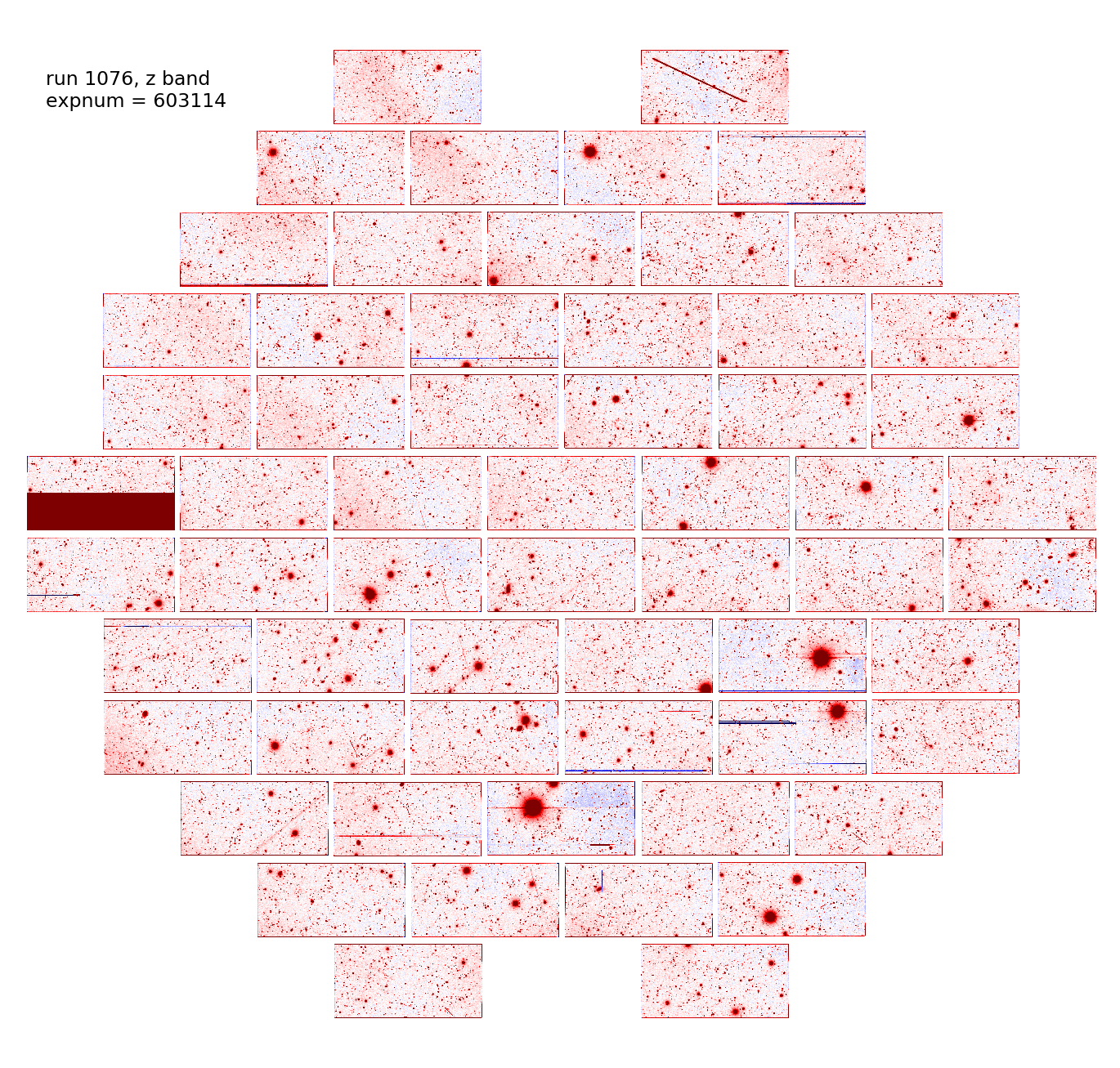 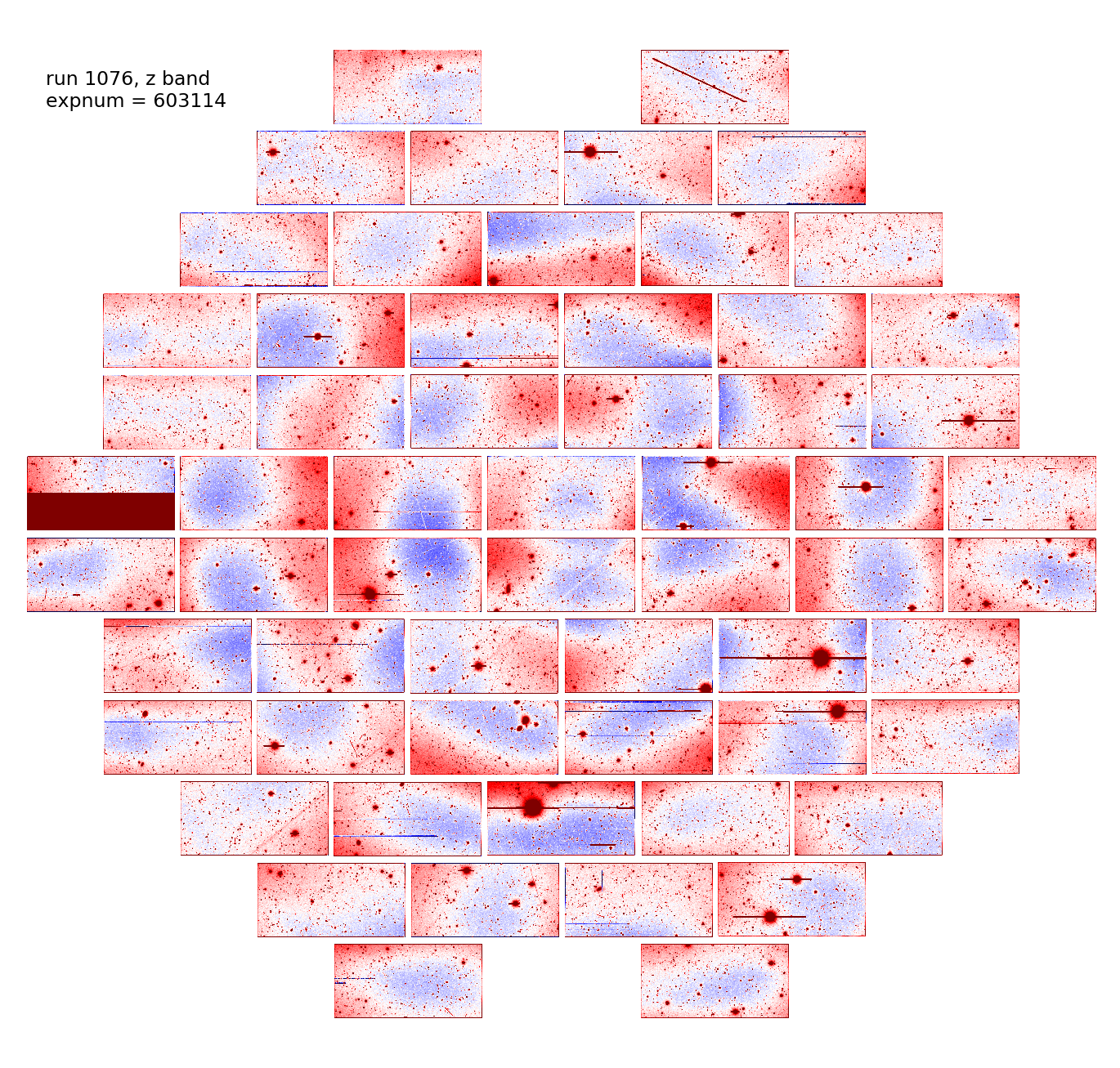 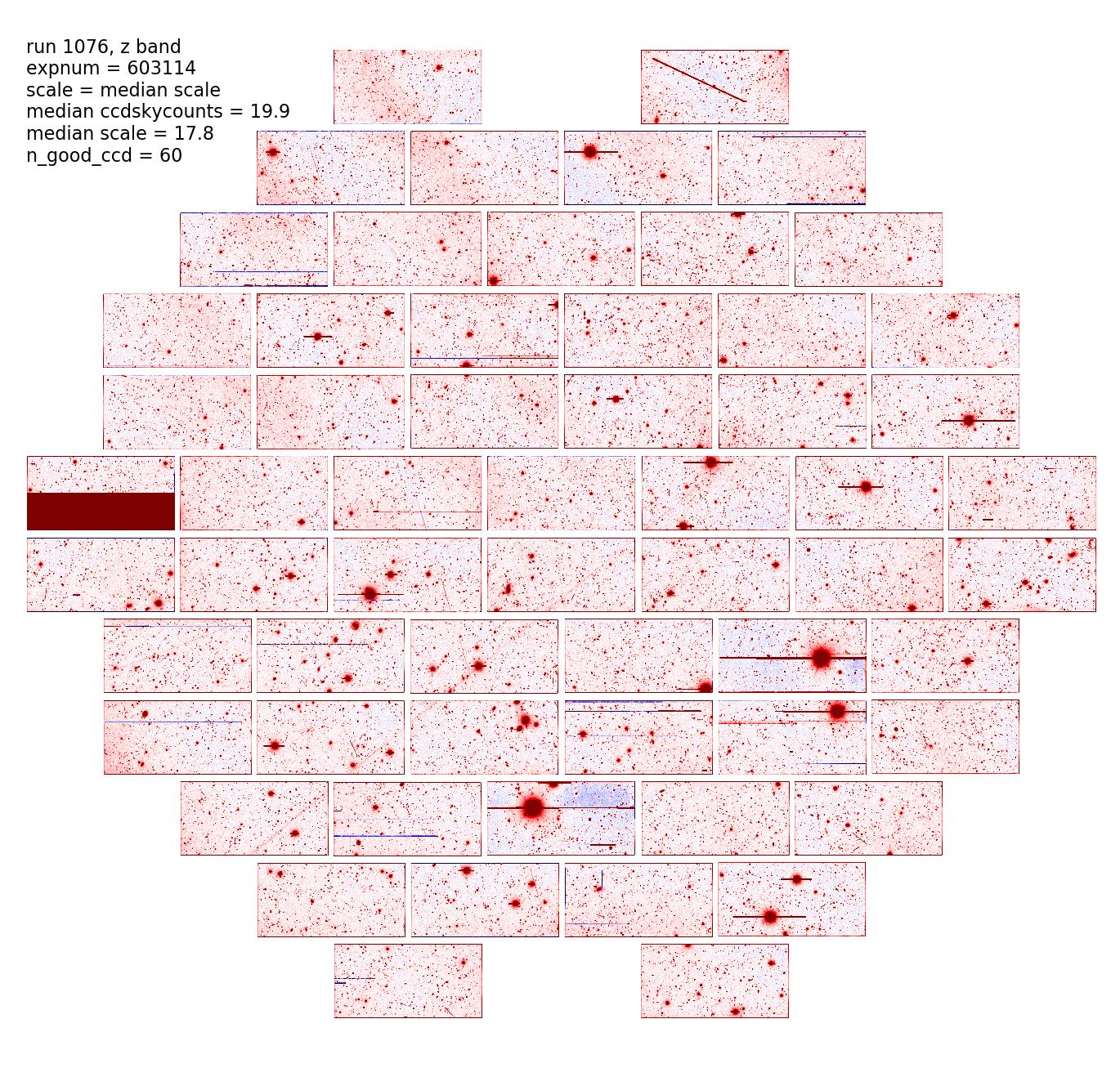 The residual sky patterns are usually very stable for many nights. Therefore we correct for the sky patterns using sky templates that are generated for each night or multiple consecutive nights depending on the number of exposures available. All the DR9 exposures are grouped into "runs" of adjacent exposures of the same filter, and a sky template is generated for each run. We require that each run has at least 25 exposures that meet our quality cuts (described below), and if a night has insufficient exposures, the next (or a later) night is included until there are at least 25 exposures.

We also apply quality cuts for exposures to be used in stacking. We require that an exposure is not too close to another exposure in the run, that it meets some depth cut, and that it doesn't have too many bad CCDs. Images with PLVER=4.1 are excluded from template creation and from sky pattern correction, because such images used the older version of the CP sky-subtraction code and so are not affected by the residual patterns. Before stacking, the images are normalized by the median of the ccdskycounts value from all CCDs that cover the exposure of interest, and all DR8 sources (blobs) are masked. Note that the CP ood mask is not applied. 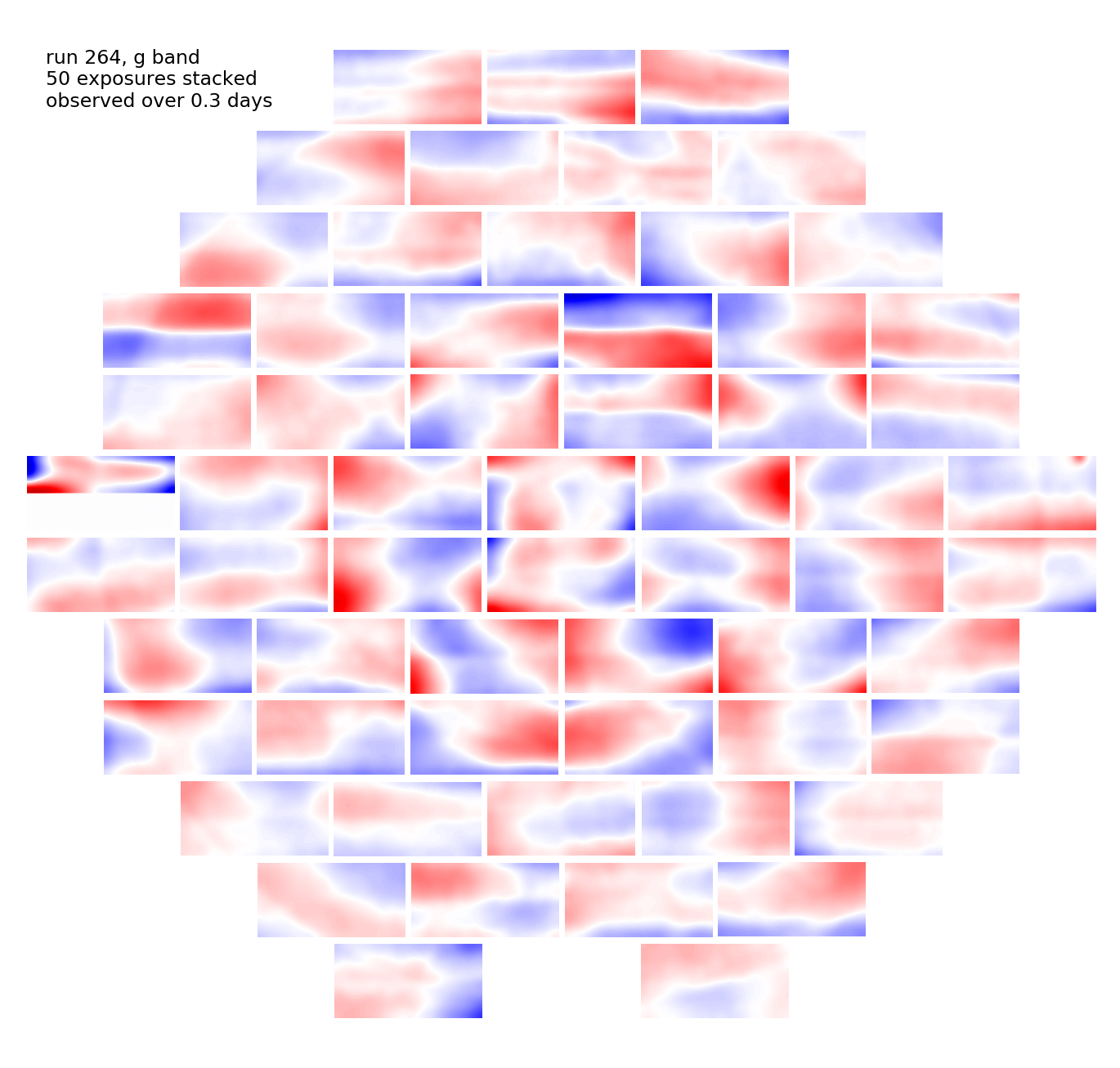 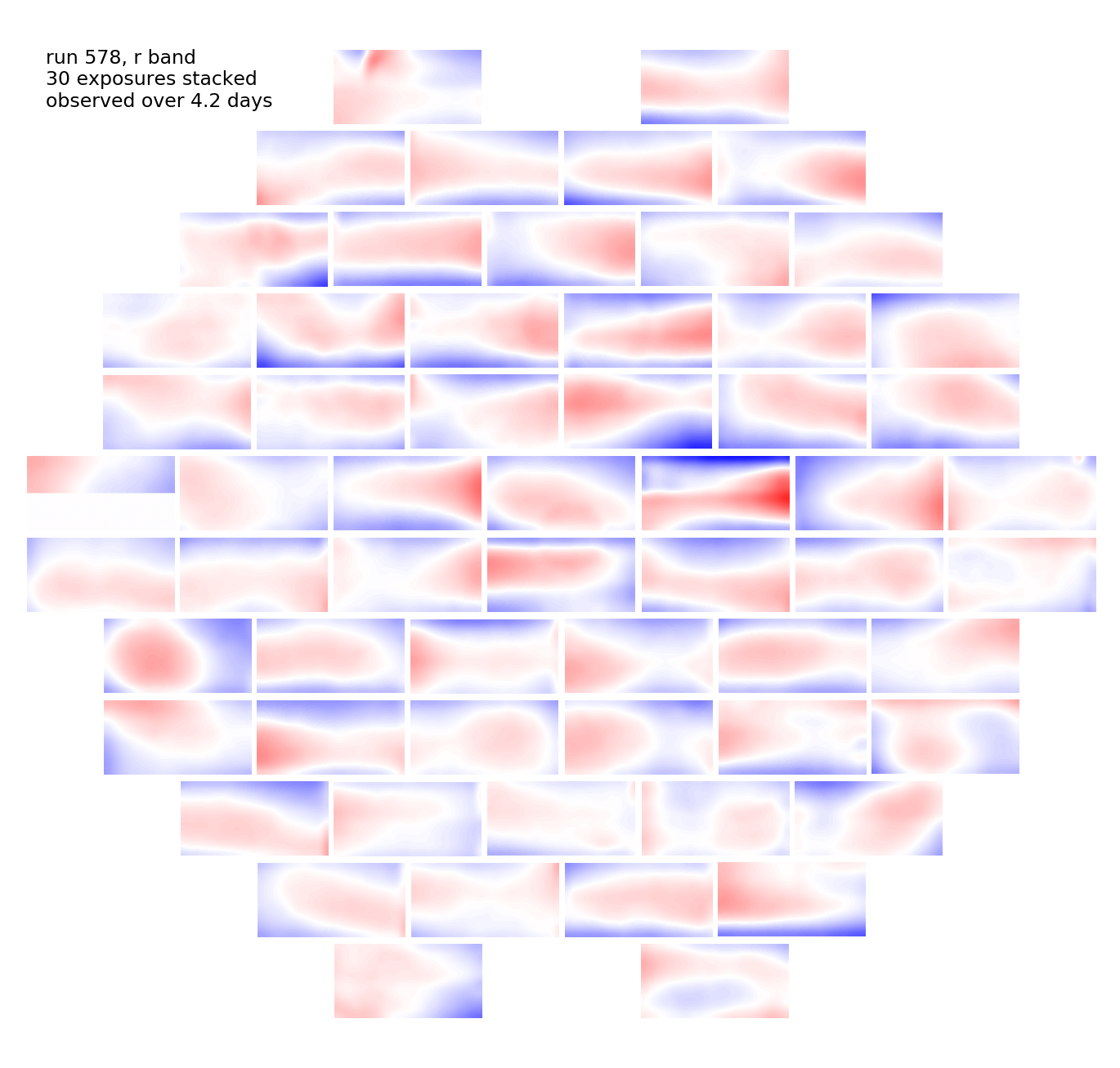 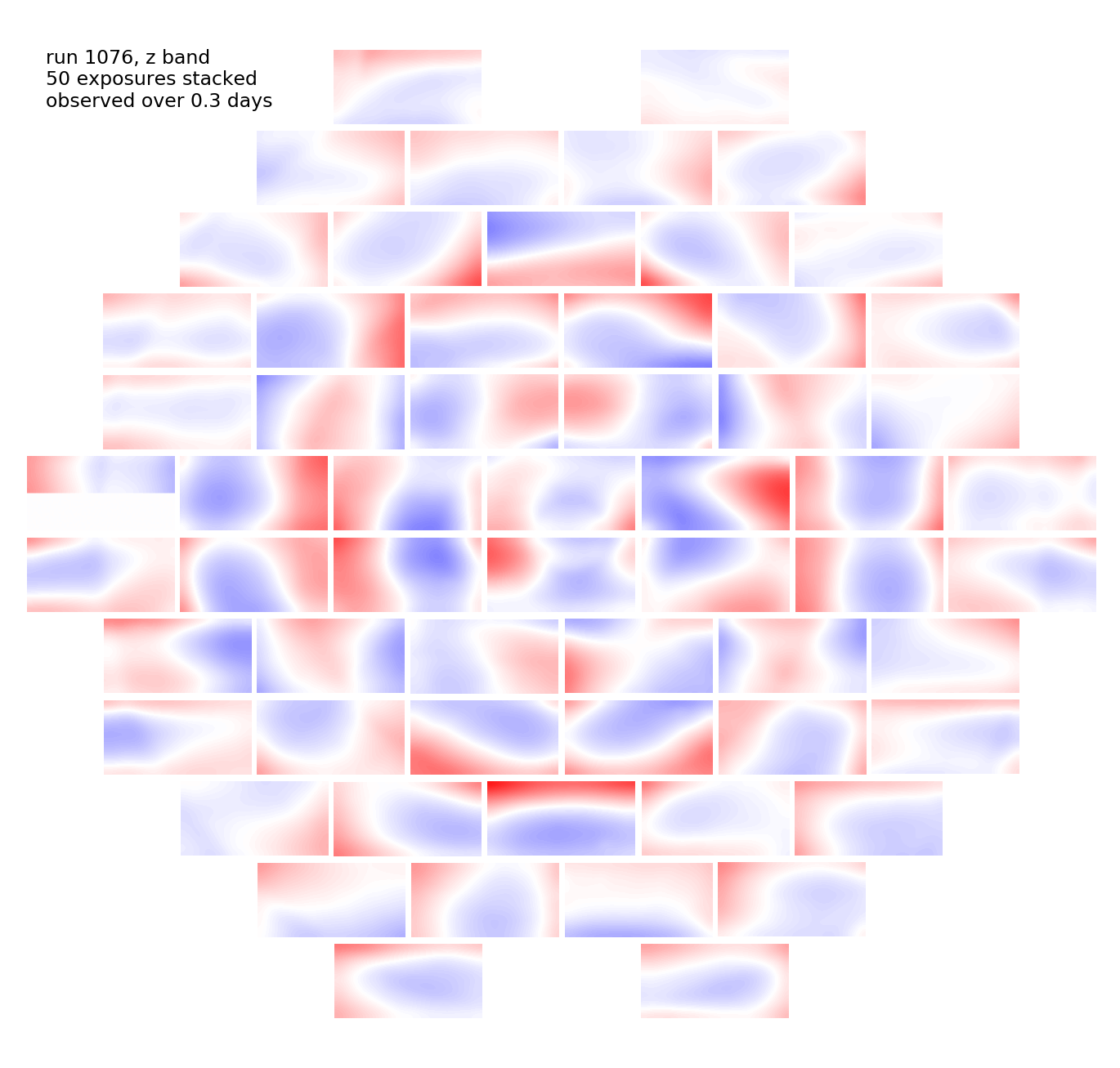 Each blob-masked CCD image is fit with its corresponding template, and the median scale over the exposure (rather than, i.e. the per-CCD scale) is used to apply the sky correction. For exposures outside the DR8 footprint or that cover fewer than 10 CCDs that have per-CCD fits, we use the median ccdskycounts value over the exposure as the sky scale.

The sky-corrected image can be calculated as:

The code used to correct for sky patterns for DR9 of the Legacy Surveys is available on GitHub.