Starting with DR9, we use an extended PSF model to subtract the extended wings of bright stars from DECam images for DECaLS. The model is symmetric (which is a good approximation for DECam images), and is a linear combination of two components:

The inner PSF component is a Moffat profile:

This formula gives a total flux of unity by definition. Its two free parameters, \(\alpha\) and \(\beta\), are obtained by fitting to the PSFEx image of each CCD. Only PSFEx pixels between 1.8 and 5 arcsec in radius are used in the fit.

The size of the DECam PSFEx image is only ~8.1 arcsec in radius, too small for implementing the extended PSF model. Nevertheless, we modify the the PSFEx image for the following reasons:

Here are illustrations of the weights for patching the PSFEx image and the weights of the stellar halo subtraction: 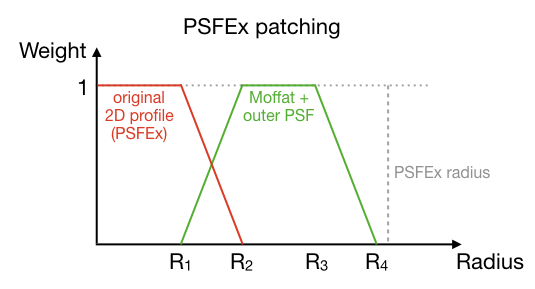 In the patched PSFEx image (the first eigen-image), the crossover between \(R_1\) and \(R_2\) marks the transition between the PSFEx image and the model PSF. The flux gradually approaches zero between \(R_3\) and \(R_4\), and is strictly zero beyond \(R_4\). For the other eigenimages, the values for each pixel gradually approach zero between \(R_1\) and \(R_2\) (i.e. the red curve in the above plot), and they are strictly zero beyond \(R_2\). To preserve continuity, the outer PSF component is included for PSFEx patching, even though it's not used in the fitting; it contributes a negligible fraction of the flux in the PSFEx image.

Here is an example of the Moffat profile fit to the PSFEx image, and the corresponding original and patched PSFEx image: 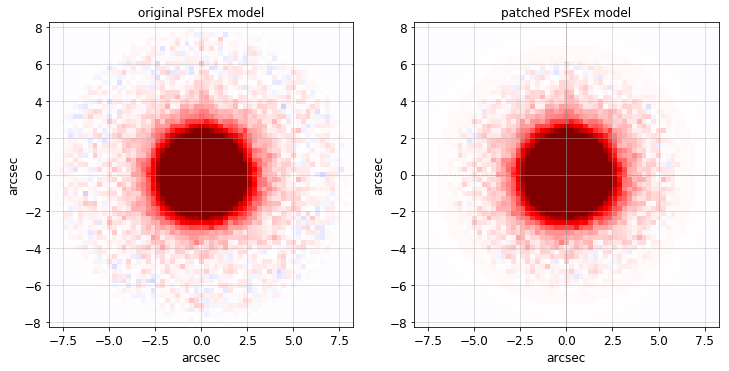 For \(z\hbox{-}\mathrm{band}\), the outer PSF is a weighted Moffat profile. For most CCDs, the Moffat parameters (with radius in arcsec and surface brightness in \(\mathrm{nanomaggies}/\mathrm{arcsec}^2\)) and the weights are (for a 22.5 magnitude star):

Below is an example of the model PSF profile in \(g\hbox{-}\mathrm{band}\), with the pixel fluxes around a bright star overplotted. The inner PSF's are obtained by fitting the PSFEx image, and the outer PSF profile is fixed and normalized to a DECam magnitude predicted from Gaia magnitudes and colors. Also included are the corresponding original and halo-subtracted images. 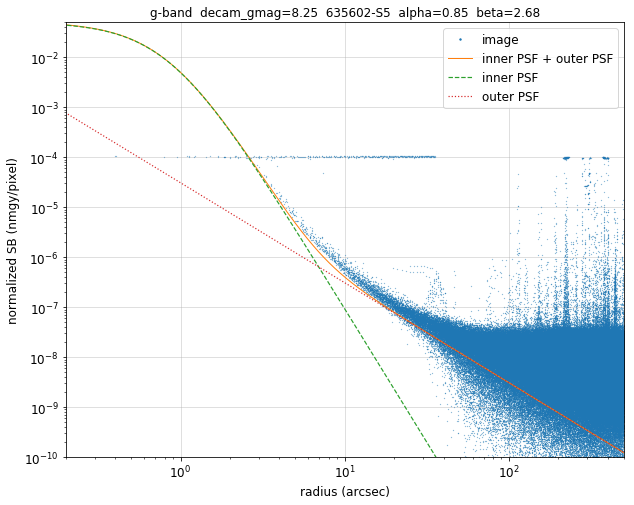 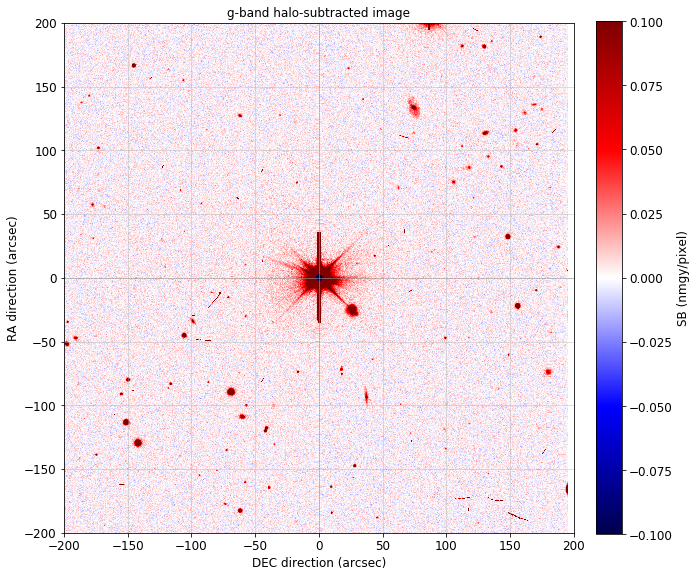 The PSFEx files used in this analysis are available in the following directories at NERSC:

The code used to analyze the DECam PSF for the Legacy Surveys is:

Further extensive tests and plots characterizing the DECaLS DR9 PSF model is available for DESI collaborators on the wiki.