The new DR9 \(z\hbox{-}\mathrm{band}\) fringe templates are generated by median-stacking a large number of images which have known DR8 sources (blobs) masked and a smooth sky pattern removed.

To decouple the fringe pattern from the much larger-scale sky residual pattern, we remove the latter before stacking. This smooth sky pattern is computed on a per-night basis, and by masking known sources using the DR8 blob mask and then convolving the masked image with a Gaussian filter of \(\sigma=120\,\mathrm{pixels}\).

About 1400 exposures are used to compute the median-stacked image. A \(3\hbox{-}\sigma\) clipping is applied before the median stacking, where \(\sigma\) denotes the normalized median absolute deviation.

The final fringe template, which is shown below, is smoothed via a Gaussian filter of \(\sigma=2\) pixels to reduce Poisson noise, and normalized so that a single fringe scale factor can be applied to all images in a single exposure.

Preparation for the per-exposure fitting is similar to the fringe template creation. The smooth component of the sky residuals is removed and known sources are masked. For nights that have insufficient \(z\hbox{-}\mathrm{band}\) images for stacking to determine the smooth sky pattern, we compute the smooth sky pattern with a different procedure via spline interpolation [1]:

There are several instances for which the new \(z\hbox{-}\mathrm{band}\) fringe corrections for DR9 required special handling: 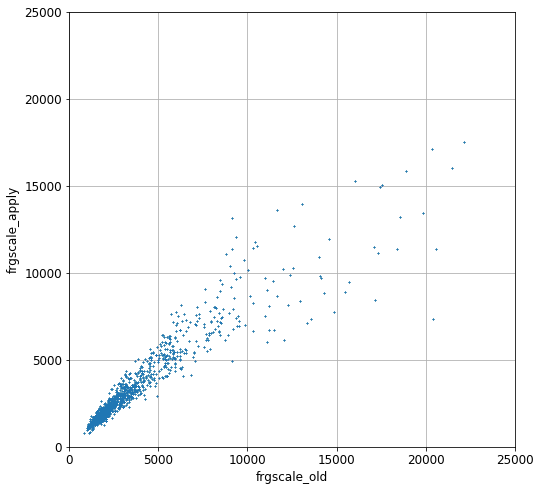 The code that calculates the new fringe templates is available on GitHub.

These splines are not the same as those used in the Tractor processing.