Data Release 6 (DR6) is the sixth public data release of the Legacy Surveys. It is the second public release of images and catalogs that combine the Beijing-Arizona Sky Survey and the Mayall z-band Legacy Survey (BASS and MzLS; DR5 comprised the fourth release of data from DECaLS). Imaging from the Legacy Surveys is first reduced through the NOIRLab Community Pipeline before being processed using the Tractor.

The table below indicates the area covered in DR6 for different numbers of passes and in different filters. These are precise area estimates derived from the geometry of CCDs that contribute to the Legacy Surveys footprint.

DR6 includes the stacked images and the Tractor-based catalogs. The size of the DR6 data distribution is:

For all of the Legacy Surveys, including BASS and MzLS, co-added images and Tractor catalogs are presented in "bricks" of approximate size 0.25° × 0.25°. Each brick is defined in terms of a box in RA,Dec coordinates. For the image stacks, we use a simple tangent-plane (WCS TAN) projection around the brick center. The projections for the \(g,r,z\) filters are identical. There are 662,174 bricks spread over the sky, meaning that each brick has an average area of 0.0623 deg2. The brick images have some overlap. The co-added images should be used with caution, as noted below in the Image Stacks section.

There are approximately 310 million unique sources in DR6 spread over 92,287 bricks.

Images from all 3 of the Legacy Surveys can be viewed directly using the Sky viewer and raw data can be obtained through the NOIRLab portal (see also the information near the bottom of the files page).

Sections of the coadd images in DR6 can be obtained as JPEGs or FITS files using the cutout service, as follows:

As of the writing of this documentation the maximum size for cutouts (in number of pixels) is 3000. Pixscale=0.262 (arcseconds per pixel) will return (approximately) the pixel scale used in the coadds. The native pixel scale of the Mosaic camera (used for \(z\) band) is approximately 0.262, and for the 90prime camera (used for \(g\) and \(r\) bands) it is approximately 0.454. For information on how to recover DECaLS cutouts, see the DR7 description page.

See also the list of URL/cutout patterns that are supported by the viewer.

The configuration files for SExtractor and PSFEx that we used for a given iteration of our codebase are available on our github page.

The Community Pipeline removes a sky level that includes a sky pattern, an illumination correction, and a single scaled fringe pattern. These steps are described on the NOIRLab Community Pipeline page. This makes the sky level in the processed images near zero, and removes most pattern artifacts. A constant sky level is then added back to the image that is the mean of what was removed.

Additionally, we compute and remove a spatially varying (spline) sky model, by detecting and masking sources, then computing medians in sliding 512-pixel boxes.

Note that, as of DR5, the "REX" model replaced the "SIMP" model used in DR4, DR3 and earlier data releases.

The flux calibration for BASS and MzLS are on the AB natural system of the 90Prime and Mosaic-3 cameras, respectively. An AB system reports the same flux in any band for a source whose spectrum is constant in units of erg/s/cm²/Hz. A source with a spectrum of \(f = 10^{-(48.6+22.5)/2.5}\) erg/s/cm²/Hz would be reported to have an integrated flux of 1 nanomaggie in any filter. The natural system means that we have not applied color terms to any of the photometry, but report fluxes as observed in the 90Prime and Mosaic-3 filter systems.

As of DR6, PSF photometry uses the same PSF models (and sky background subtraction) for zeropoint-fitting as is later used in cataloging. This was not the case for DR5 or before. So, starting with DR6, the measured fluxes for PS1 stars should be completely self-consistent.

Our astrometry uses the Gaia Data Release 1 system. Positions of sources are tied to predicted Gaia positions at the epoch of the corresponding Legacy Survey observation. The residuals are typically smaller than ±0.03″.

As of DR6, PSF photometry uses the same PSF models (and sky background subtraction) for zero-point-fitting as is later used in cataloging. This was not the case for DR5 or before. So, starting with DR6, the measured positions for Gaia stars should be completely self-consistent, substantially reducing any systematic errors in astrometry.

The image stacks are provided for convenience, but were not used in the Tractor fits. These images are oversized by approximately 260 pixels in each dimension. These are tangent projections centered at each brick center, North up, with dimensions of 3600 × 3600 and a scale of 0.262″/pix. The image stacks are computed using Lanczos-3 interpolation. These stacks should not be used for "precision" work.

The histograms below depict the median 5σ (AB) depths for galaxies in areas with different numbers of observations in DR6. 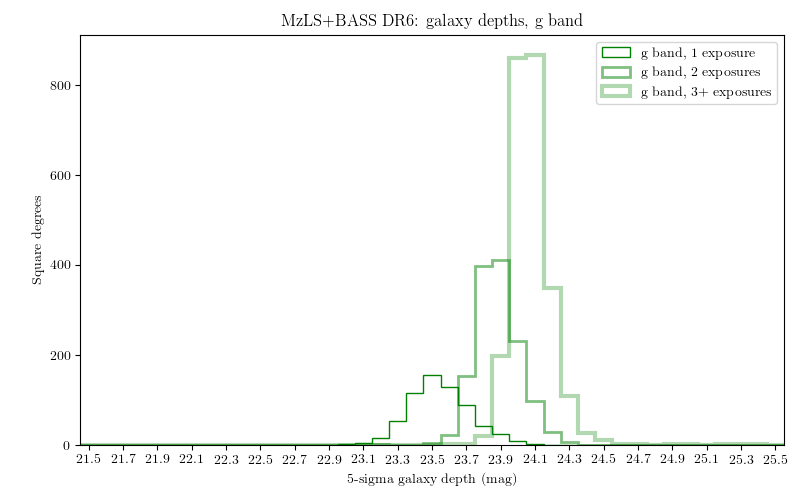 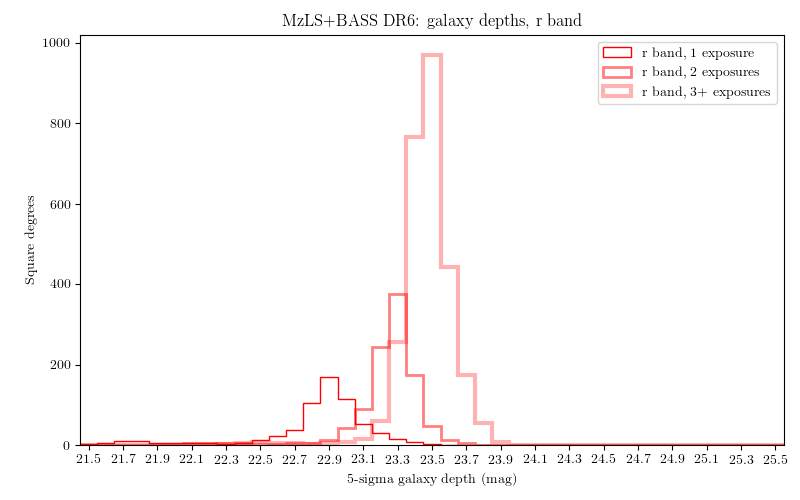 These histograms are based upon the formal errors in the Tractor catalogs for point sources, which need further confirmation. These depths can be compared to the predicted proposed depths for 2 observations at 1.5″ seeing of \(g=24.7\), \(r=23.9\), \(z=23.0\).

Continguous region of pixels above a detection threshold and neighboring pixels; Tractor is optimized within blobs.

A region bounded by lines of constant RA and DEC; reductions are performed within bricks of size approximately 0.25° × 0.25°.