For issues relevant to BASS or MzLS imaging, consult the DR4 issues page.

Repeat Sources Due to Check-pointing

The legacypipe code applied a series of check-points in case of failures during processing. Unfortunately, when the code resumed after a check-point failure, it sometimes produced a duplicate of the same source. These duplicates can be identified because they have identical coordinates and fluxes but a different OBJID. An example repeated source is here:

This source has the following attributes in catalog-level DR5 data:

(i.e. fluxes and coordinates are identical but OBJID is different).

Brick 0351m025 failed during processing, so doesn't have a Tractor catalog. However the coadds did run to completion for brick 0351m025. We've tried to redact brick 0351m025 from all of the relevant files, but we may not have completely removed it from all possible places in DR5. It could, for instance, still appear in the viewer:

Missing CCDs in the region of Gaia bright stars

Some DECam CCDs that are included in DR3 are not included in the DR5 release. This is because the DR3 zeropoints were based on comparisons to stars from PanSTARRS Data Release 1 (PS1), whereas the DR5 zeropoints are based on comparisons to the subset of PS1 stars that are also in the Gaia Data Release 1 catalog. DR1 of Gaia has "holes" in its coverage, with large spatial regions missing PS1 stars. An example is shown in the figure below, which plots the PS1 calibrators (black dots) and the PS1-Gaia calibrators (blue dots) with the outlines of the DECam CCDs. Since only CCDs with > 20 matched calibrators are retained in the DR5 version of the catalog, CCDs covering regions like CCD N26 in the figure would be dropped from DR5. 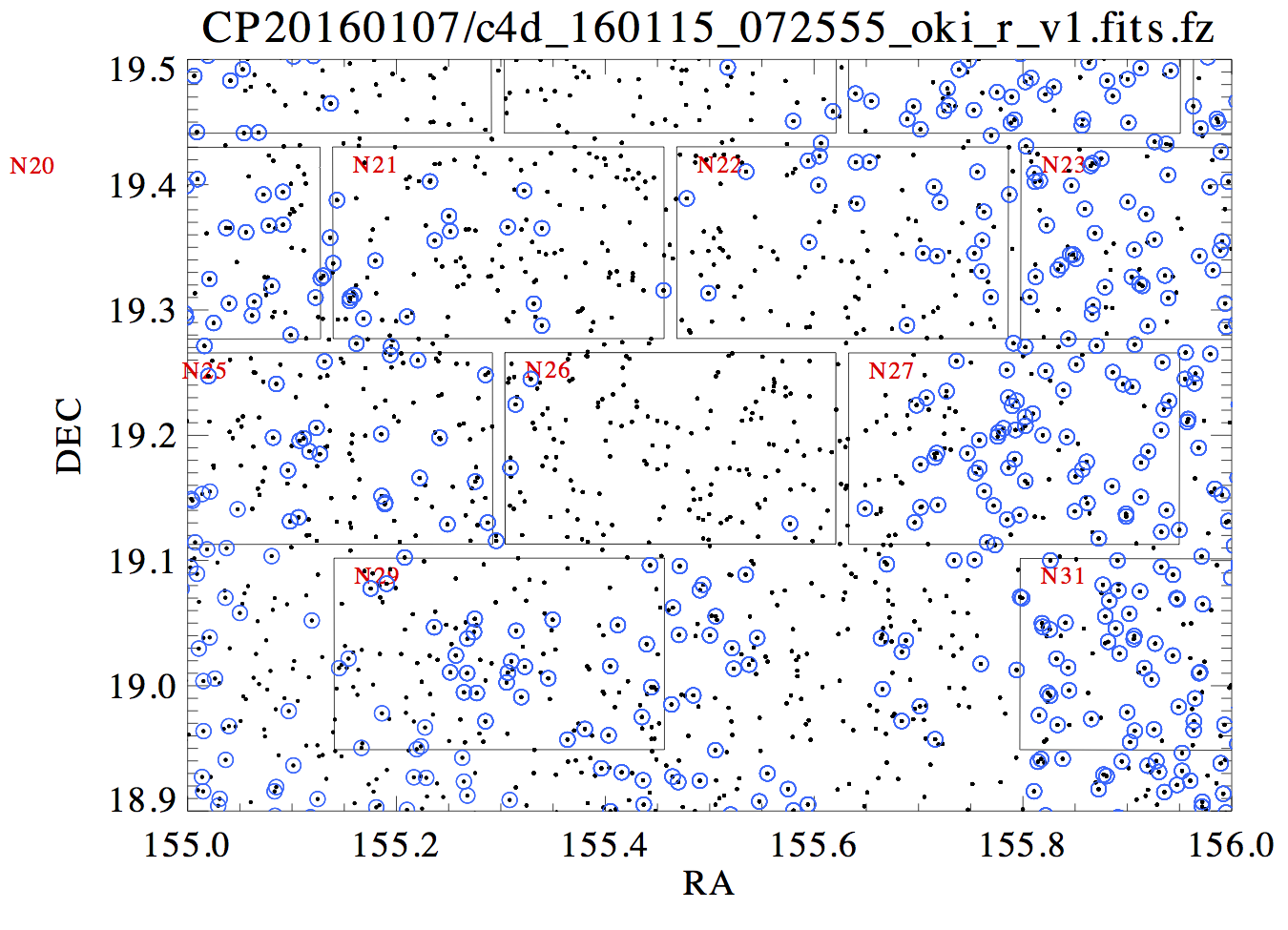 The ccds-annotated-dr5.fits.gz file provided with the original DR5 release included a photometric binary column that was computed based on zeropoints from our "traditional" IDL zeropoints code. However, during DR5 processing we used our new Python-based legacyzpts code to produce zeropoints, and we performed a photometric cut based on those zeropoints. As a result, some CCDs that appeared in the original ccds-annotated-dr5.fits.gz file with the photometric flag set to True were not actually used in the DR5 reductions.

The updated ccds-annotated-dr5.fits.gz file (replaced on December 7th, 2017) includes a new column, new_photometric, that contains the correct set of CCDs used in the DR5 reductions. In addition, there were 228 CCDs for which annotations were not computed in the original file, and these are added in the update.